For its second entry in the 24 Hours of Daytona, the ORECA 07, designed and manufactured by ORECA Technology, showed all of its great qualities. Entered by American team CORE autosport, the prototype clinched its first podium in Daytona, third place overall, just 90 seconds away from the winner. Enough to come first in LM P2 class, demonstrating performance and reliability. Additionally, seven of the ORECA chassis got in the Top 10! 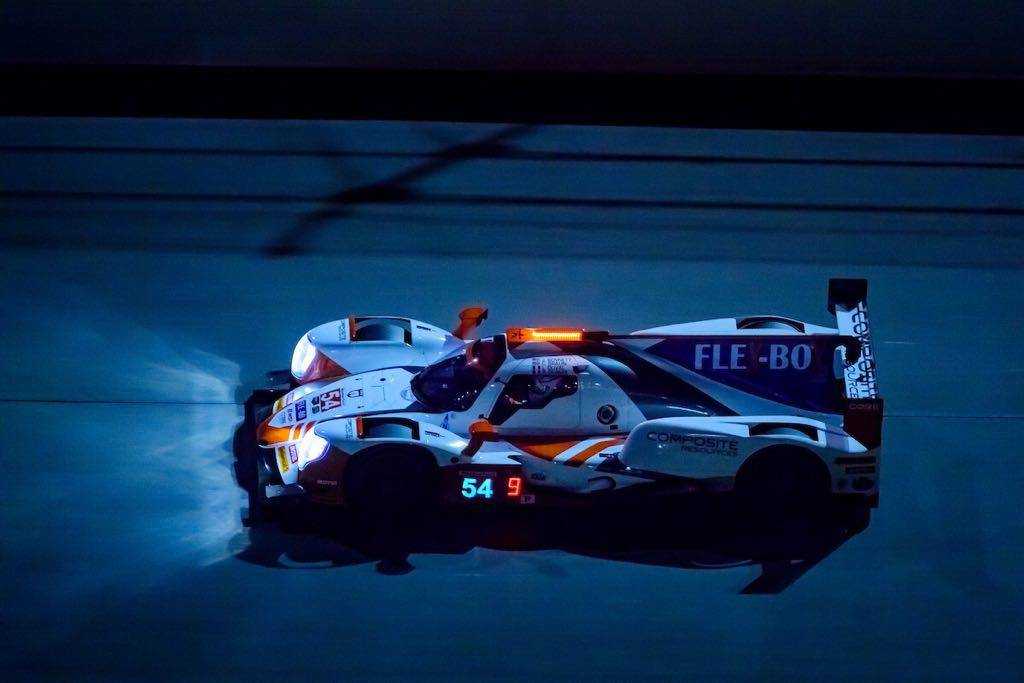 On the starting grid of the twice around the clock in Florida were eight ORECA chassis. Six LM P2 ORECA 07 prototypes and two DPi ACURA ARX-05 prototypes. The eight cars crossed the finish line!

During the free practice sessions and the qualifying, ORECA chassis went at a high pace. For the first race of its career, the No. 7 ACURA ARX-05 posted the second fastest time, seven thousandths of second from the pole. Entering an LM P2 for the first time, Performance Tech Motorsport clinched the best time in class with the No. 38 ORECA 07.

The first round of the IMSA WeatherTech SportsCar Championship kick-started on Saturday, at 2.40pm local time. Performance Tech – last year’s winner in Daytona in the Prototype Challenge class – started at a fast pace to defend the first place in LM P2 until the third hour of the race.

Hour after hour, the strategies of each team got unveiled and readjusted. One after the other, all teams suffered punctures, causing important damage particularly to bodyworks. Teams worked hard throughout the race, especially overnight, to allow each car to get back on track.

For several hours and against tough competition, DPi prototypes ACURA ARX-05 fought to remain in the lead. Actually Team Penske’s two cars led most of the first part of the race, until the No. 6 car faced a mechanical issue and the No. 7 had a contact with another contender. Despite that, both cars managed to cross the finish line within the Top 10 for their first entry in this competition, a few months after their shakedown on track.

As for LM P2 ORECA 07s, the Jackie Chan DC Racing by Jota Sport delivered fantastic stints which enabled the team to get first in class and in the Top 5 overall with the No. 37. Unfortunately, a series of punctures forced it to move down in the standings. The sister car had to face the same issues, with the same consequences.

As for CORE autosport and their No. 54 ORECA 07, they delivered a clean and consistent performance, making the most of their opponents’ difficulties and moving up the rankings lap after lap. 19 hours in, the car entrusted to drivers Colin Braun, Jon Bennett, Romain Dumas and Loic Duval, entered the Top 3 where it remained until the end of the race. After one final panting sprint, the car crossed the finish line within the same lap as the winners.

A little bit away behind, Jackie Chan DC Racing’s No. 78 car, having been just off the podium for a quite a while, and despite a drive-through penalty during the last hour, managed to finish within the Top 5. In the end, ORECA chassis occupy all of the following positions in the Top 10. All of the eight cars met the chequered flag and seven of them finished within the Top 10, demonstrating great reliability.

Once again, the 24 Hours of Daytona have proven to be a complex and demanding race. This edition was tough and fast paced, comprised a few neutralisations only, thus giving prominence to the competition itself.

“That’s not the result we were aiming for to start with but let’s not be ashamed of it” says ORECA Group Technical Director David Floury. “All of the cars crossed the finish line without encountering a single issue to do with reliability. Though there’s nothing like this race…! It’s a shame, we missed an opportunity with the ACURA ARX-05s and the ORECA 07, as our opponents had some difficulties during the race. For its first entry in LM P2, CORE autosport delivered a solid performance with the ORECA 07, concluding with a great podium. This weekend also confirmed that the ORECA 07 can allow teams that are only starting in this class to be competitive straight away, just like Performance Tech was. This bodes well for what’s to come next.”