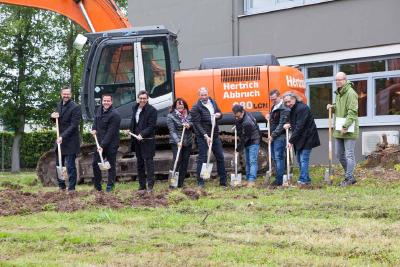 After an extensive planning phase, the precision tool manufacturer heimatec has given the green light to the construction of an additional production hall at its headquarters in Renchen with the symbolic first cut of the spade. In the construction as well as the creation of highly modern manufacturing facilities around 8 million Euros has been invested.

When heimatec bought office and production facilities in 2005 with a total of 4,000m2 and a surface area of 26,000m² in Carl-Benz-Strasse in Renchen’s industrial zone, the expansion reserve was almost entirely used up. Due to the continually favorable order books of the last few years, the limited manufacturing capacity was increasingly a brake on growth and therefore an expansion in production became inevitable.

The symbolic cut of the spade ceremony was followed by the start of construction of an additional hall with a total of 2,500 square meters.