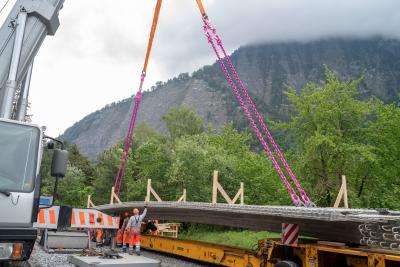 It's an impressive image when a massive bridge is slowly suspended in the air to seemingly float effortlessly before it accurately joins in where it was intended. A task that looks so simple is the result of very detailed planning and high-tech equipment made by RUD. Onlookers were in awe of the result at the installation site of a bridge consisting of prefabricated elements. Throughout the entire project the team faced very specific challenges during loading and installation.

Bridge elements consisted of precast concrete. The challenge: these large elements, at a length of around 20 metres, a width of around 4 m and a total weight of approximately 88 metric tons, only feature thin walls, making them fragile and requiring a special solution on the basis of detailed plan as well as sophisticated technology. The four, permanently defined attachment anchors in the concrete were only designed for a maximum load of 25 metric tons. If the load were any heavier, they would be ripped out. This meant that even load distribution was paramount. [...]